The Legend Of Great Beef. 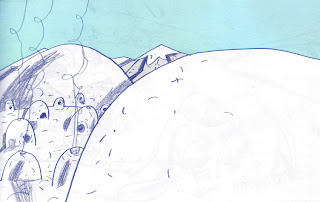 High amongst the stony tops of the world warm folk live kindly, out in the cold. 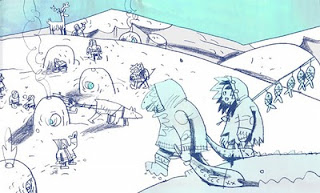 These people live well and thrive on the sparse fruits the wilderness offers. Fishing, hunting, working hard and playing happily. Enjoying good terms with friendly neighbours. Sadly, they endured one hardship that they all would be happy to forget . . . 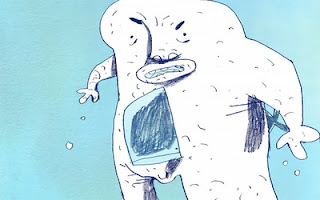 No one thing in this world is more miserable or more worrying than the mighty giant, Great Beef. 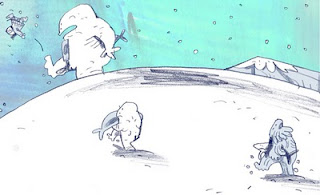 Great Beef was a foul attitude darkening the heart of one enormous angry snowman. He would roam and bellow and crush and eat hugely all day long. He would command all other snowman, yetis and wild folk to serve that grumpy mountain, forcing them to scour and raid to fill his chilly stomach. 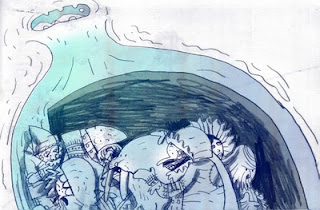 His belly bulged with lost souls. Innocent bystanders and brave warriors that tried and failed to budge the fat monster from their happy world. He’s scoffed the lot. Even a whale. 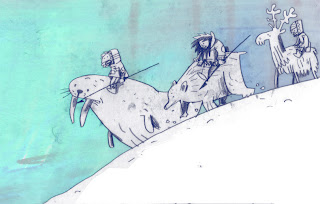 Though hope never dwindled and salvation was planned. The three bravest hunters remaining set out to find Great Beef and make a stand. They tracked the monstrous prey to the ground where they would finally showdown in the snow.
But not till they had they had readied themselves for the fearsome encounter. 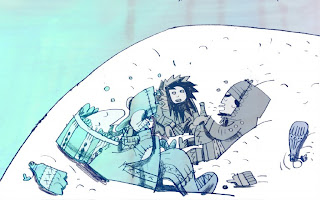 Each hunter had carried vessels of strong liquor with them to the fray and they would not dare to engage the menace before they had drunk every last spikey drop. 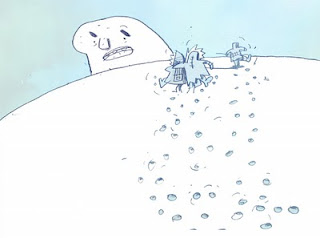 With boldness in their hearts and fear in their furry wellies, the heroes advanced unevenly toward Great Beef. 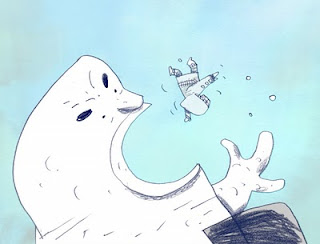 The battle was not a long one. 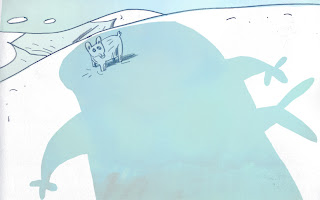 Great Beef continued his reign of gloom over the land. 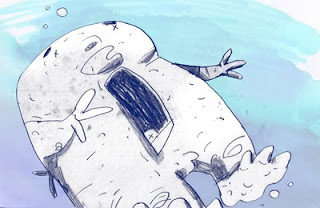 For a short while at least, the scoffed hunters slept coldly inside his belly and the booze soaked from them into the snowy interior. Great Beef puzzled and wobbled and shambled and conked out, addled by the stiff drink within. 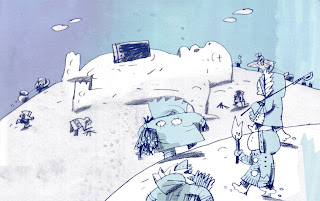 At last, here was his downfall. As he snored, the accomplices arrived and set to work the plan at hand. 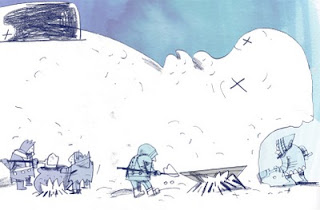 Great Beef was scooped and shovelled and boiled to make giant kettles of sweet tea. 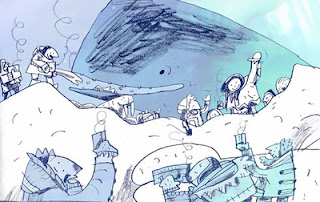 As Great Beef's previous feasts are freed from his chilly guts they get the to toast to their miserable host. The unswallowable whale, his greatest filling, happy to turn the tables and carry Great Beef in his own belly for a time. 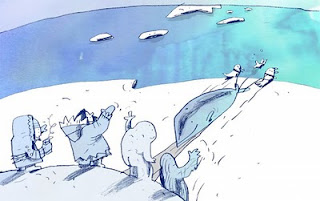 All folk rejoiced and long lost yeti friends and snowman companions where re-united. All folk living warmly and happily on top of the world once more. 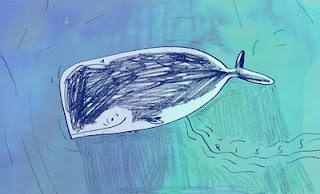 Deep below Great Beef was set free, warmer and gentler than he ever was before.
Posted by WJC at 10:40

That is just sensational!

As a guy who knows and loves the kids' books market, I tells ya, this would make a great kids' book. They love the following things: savagery, genitalia, and messy bodily functions. And this story has it all!