Off to the MCM Expo at the Excel Centre, London Docklands. As usual, posting from my phone, accompanied by a poorly presented photo no doubt. All the same goodies that I took to Comiket and Bristol, including PotD Season 2 and Gungle Rock Art Print and Shore Leave postcard book, all limited editions. See you there if you're going!

Picture here is a Hunch Parsons sketch from yesterday. 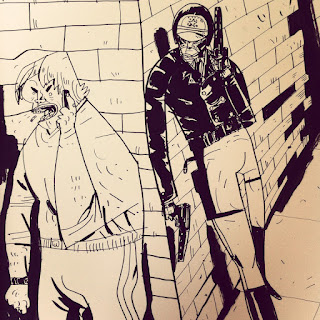 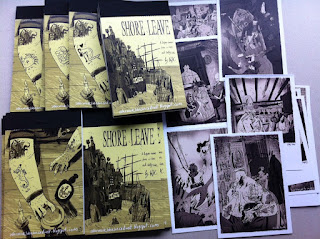 This is 'Shore Leave' A dozen collected views from of rum and salty coves IN a rum and salty cove. Since a holiday to the craggy North Cornish coast earlier this year, I have been drawing these scenes on occasion. Collected here, in a wonderfully high quality book by the splendid guys at Ripe Digital. 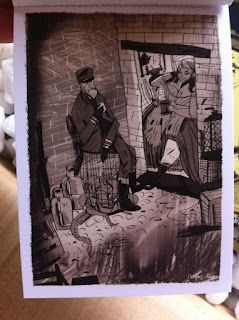 These books are signed and limited to 100. Each has an individually drawn tattoo on the swarthy sailor arm on the back cover, available now in my shop. If you order, feel free to suggest the tattoo or initials you'd like on there.

I am very happy to be asked to participate in the WebTrip project, "the first european collective and participatory Comics serial." On FB here

Following the intertwining travels of Jules and Romane as they cross European  countries, as told by comic creators of those countries. Episode 5 sees Romane visiting an old and hopeful English aquaintance. Not far from here.

Thanks to Jc Deveney and PMGL 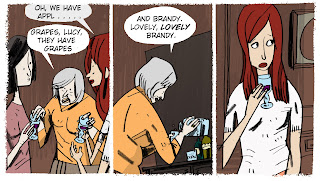 The Alter Ego show has left the building. Great fun to be part of. thanks to Klingatron for masterminding the event and to Red Bull who where excellent host. A big highlight for me was not only to hang with the amazing artists involved but meet these guys as well. All worth keeping an eye on. 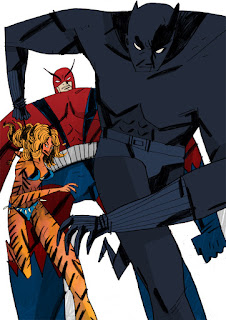 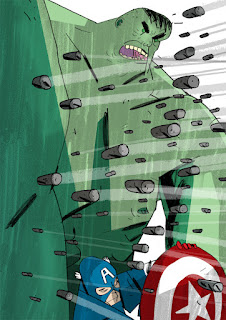 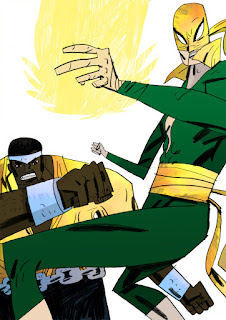 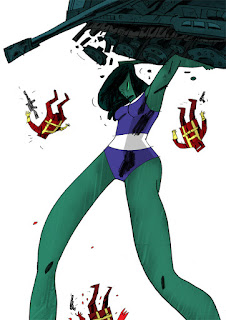 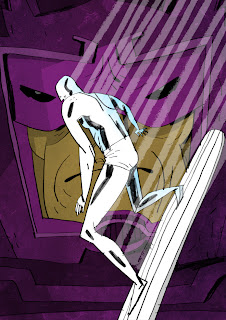 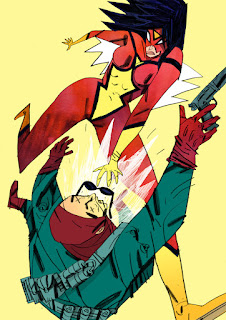 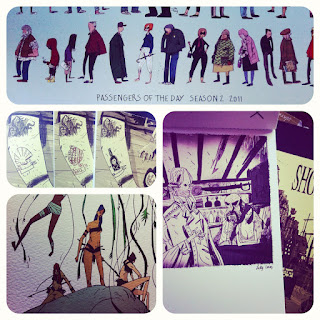 Off there now! Once again without finding the to put up a proper post. It's at Temple Meades Station in 'The Old Train Sheds'. Now new comics from me as I'm bigger comics on the go. But I'm all bundled up with prints and the 'Shore Leave' postcard book. At a tricky tenner, it is a signed n numbered 12 page postcard book, personalised on the back cover.

For those at the show, I will be participating in David Hine's panel on Sunday (3pm) 'Ones to Watch' Come and see!

Also, new Alter Ego buddy Cottonmouth will be at my table selling his now legendary 'Everyone Hates Cyclops' 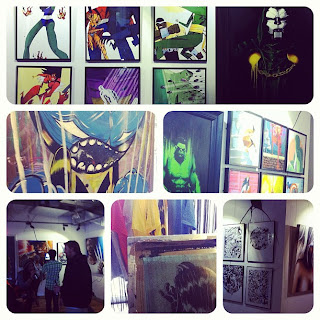 I had a high old time at the Alter Ego opening last, lots of great people and it was amazing to be exhibiting along some fantastic artists. More pictures on the FB site.

A couple of weeks ago now, I was at the Comica Comiket event. It was a pretty light day for sales for me but as usual I had a cracking time seeing all the people and talking an every opportuntity. I did also get to be part of the 'Drawing Parade' which was an exciting and unusual experience. Here's a brief run through of events, including the following day when I redrew the fella. Happily the picture was bought on the day, proceeds went to Comica. 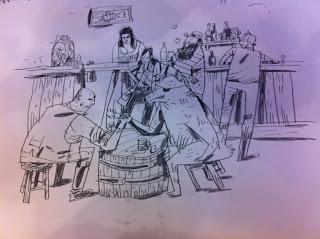 A view of the actual thing


It is important to point out I was panicking about what I was to draw coming up to my allotted time, so put out a call for help on twitter, the superb Lizz Lunney suggested a bear (THANKS LIZZ!) so I went with this fella.

After the drawing was an interview with Dan Fish for Panel Borders. I'll let you know when it is available BUT I had done an interview with Dickon Harris a while earlier. (shamefully, the release for Gungle remains much the same) That is here. 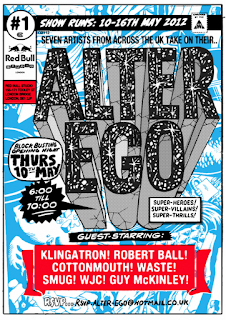 I am dead pleased to be part of The Alter Ego Exhibition. It opens on thursday, details above. I'll be struggling to hold my own amongst some incredible talent in the show. An amazing variety of artists.

'The exhibition brings 7 artists from various cities in the UK delivering an exhibition of brand new artwork with a variety of styles and techniques. With work from Cottonmouth, Guy McKinley, Klingatron, Robert Ball, Smug, Waste and WJC. From photorealistic graffiti to illustration with each artist studying the theme of a second personality through a mutual influence of popular culture comic books with the artists transforming the Red Bull Studios exhibition space into a comic inspired vault. The opening preview is a guest list event and Alter Ego is open to the public until the 16th May 2012.'

I have 6 pieces for the show, i'll post them in full after, but for now, here are screen pics.