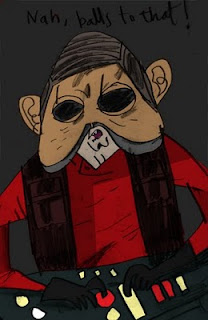 Too much to do, not much I can show. Too many day job hours. Found Return of the Jedi on telly while having a grumpy strop at work yesterday and several Grumpy Star Wars drawings cheered me up marginally.
Posted by WJC at 00:17 No comments:

Joe List is The Annotated Weekender's Annotator. He's been at it for a bit over precisely two years now. Celebrating his first year anniversary by having an 'open house' where any enthusiastic parties could join in. Happily, he decided to do the same this year and a ton of grand talent got to be An Annotated Weekender for the week. Check 'em out and make sure to check out TAW each week and Freak Leap while you're at it too.

Here's one of mine 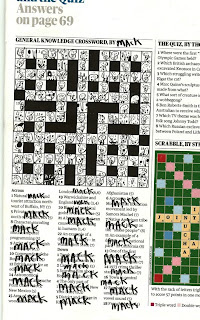 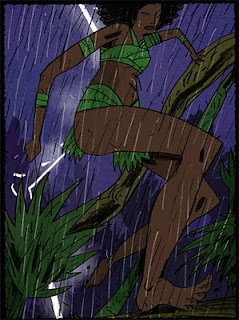 Tribe of One and The 40 Apes 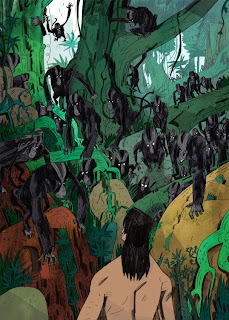 There is going to be a lot more Gungle from here on in.
Posted by WJC at 17:42 7 comments: 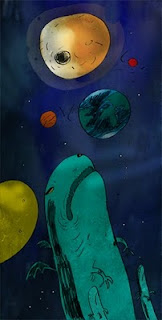 Especially for Joe Decie
Posted by WJC at 00:36 No comments: 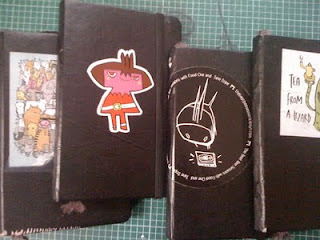 I have had a sketchbook wearing a through my trouser pocket since around 1992.I started off with A6 Seawhite's but at some stage moved on to the snazzy and unfortunately pricey Moleskin.There is no need really to explain how good it is to have a sketchbook and pencil with you at all times. In my case there are a a large number of shopping list and unhelpfully unlabelled phone numbers as well as ideas, plans and sketches. 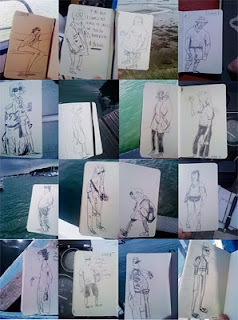 With an unsettled system with regard to being at my desk, having these fellas around is a major help. Fruits Delamare for Solipsistic Pop was partially thumbed while walking with my family on holiday (thumbs and early sketches finished in the tent afterwards)

Often with some drawings scanned and coloured straight form the book. 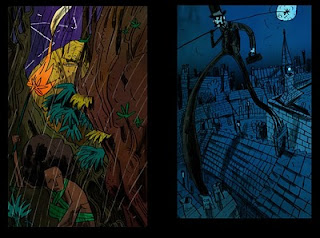 I have just finished one, it lasted almost a month exactly. There is something I find genuinely impressive about the paper and the quality of line it takes from a pencil. Despite the cost, most usually paid for as I run out and get nearest new one. A high price indeed at a Smiths or Waterstones, though I've just got four as Amazon have a cracking price for them. (WHOAH! HAD! they've gone up nearly 3 quid since yesterday!!!)

Looking forward to filling them in. 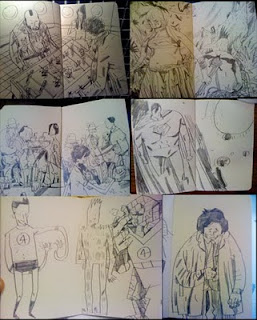 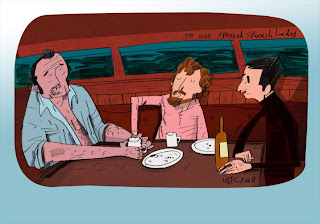 Currently drawing like crazy but have not posted a lot of late. This is a picture done for a pal at Christmas, he didn't ask for it but we gave it him all the same.

I keep meaning to do this again, with Chief Brody and not Rob on the right. I think it'd be another one that Hey Oscar Wilde! might appreciate.
Posted by WJC at 13:30 3 comments: 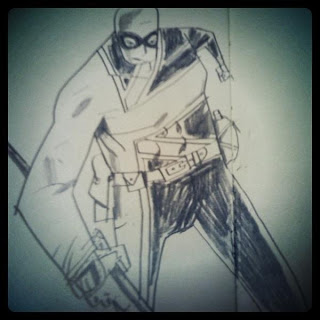 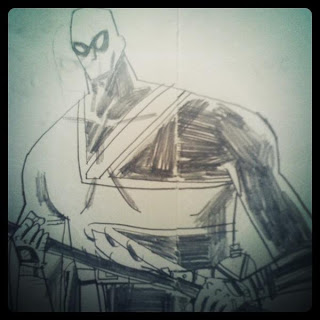 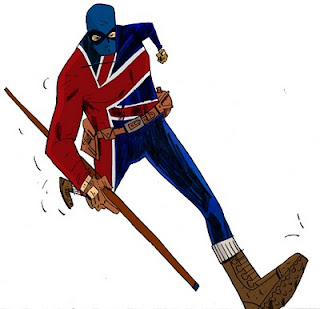 Paul Grist's Jack Staff is superb and a MUST read. I did a Tom Tom a few years ago too!
Posted by WJC at 23:41 No comments: 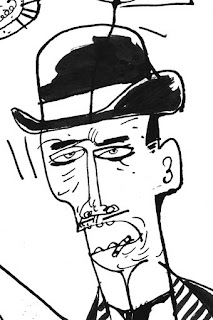 At the end of the day, when the drawing stops it's usually due to the fact that what I want to get on paper no longer turns out right at all. The Plan for the day is finished. But rather than end the day on that sorry note there is the End of Day doodle. More reasonable than the 'Warm Up' sketch at the beginning of the day which is often an exercise in procrastination (why not start with the work planned for the day?) The End of Day is an easy treat diverting the fact that the drawing has got stinky.

Showed last week as A3 charcoal Wrestler and Captain Haddock, last nights was this small dip pen weirdo. I don't use the dip pen often so don't mind that it looks ropey.
Posted by WJC at 08:29 4 comments:

Tribe of One with The Ant People 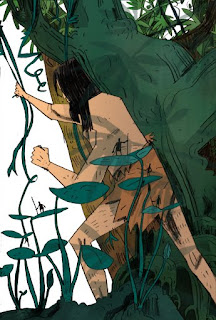 We, as a family, where sitting eating supper on saturday when The New Kid (the youngest, now age 6) announced that he had a girlfriend. Her name was Isabella Knockout Dangerous Daniels and she lives beneath the arctic ice. After further questioning we got a description of his young 7 yr old love. I have been at work since then so look forward to today's school pick up to see if there's any more gossip.
Posted by WJC at 14:09 1 comment: 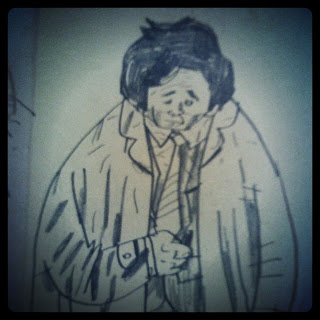 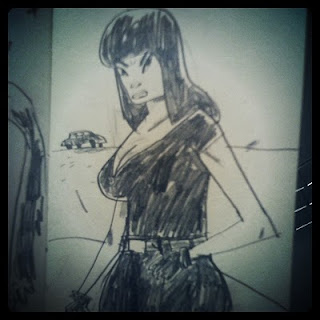 I do like the Instagram but I really ought to do something else as well.
Posted by WJC at 09:55 2 comments: 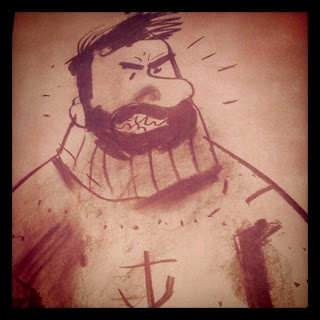 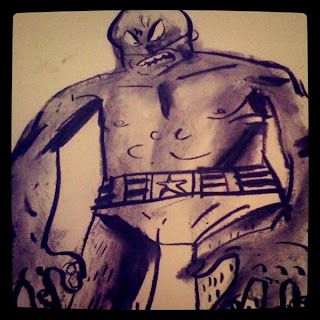 With a mind totally useless but a hand itching to draw I took a stab at an A3 pad with some very old charcoal. Lots of fun but I'm too done in to try more.
Posted by WJC at 23:13 5 comments:

For those who may have liked these pictures or this comic strip, the pencil or ink art are up for sale in the shop. Treat yourself.
Posted by WJC at 20:44 No comments:

Happy New Year of the Rabbit 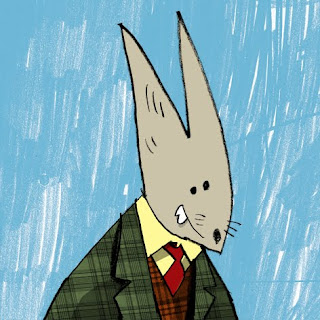 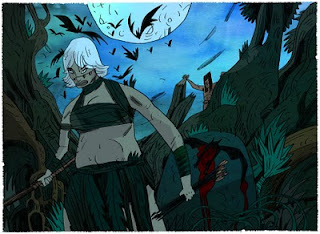 There is going to be more Gungle from here on in. However, it is one of seven projects that are currently going on between day jobs at the moment, which is keeping me busy.
Posted by WJC at 11:42 4 comments: 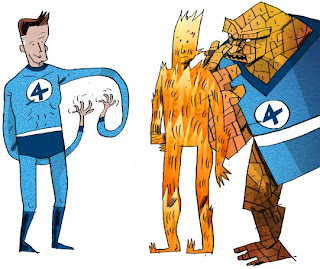 Not the worst thing that's happened to the FF lately.
Posted by WJC at 10:54 10 comments: