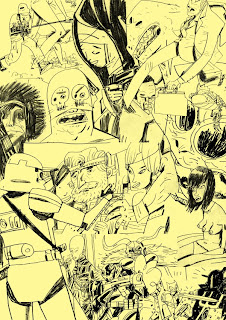 Amongst all this stuff here are some of my highlights from 2009. Which for me got my first comic pin-ups in Jersy Gods 2 and UXB and my first 3 anthology comic strip contributions completed. Angel for Pirat, still MIA, Ragnar's Charm in NBC#2 and Defender's of Albion in the imminent Birdsong/ Songbird. There was a load of other stuff going on and going into 2010 a lot of it still to do. Any unrecognisable characters up there should be revealed this year. And more hopefully.

Congrats. I look forward to seeing how things progress for you in 2010.

That is a collage of greatness.

Does having three breasts mean she's more likely to give birth to a litter?

It's going to be a great year, I'm positive! Top work, WJC.

If there is any justice in the world Warwick this should definitely be your breakthrough year - amazing inspiring stuff as always + Happy New Year!

Hey thanks all you chaps. Very kind indeed.

John, I don't know what she gets up to as I'm not writing that one. But it'll be interesting to see!