It'll be time for the next MCM by the time I get this all done, 2 left including this one.

One of the very few things I did actually buy was Phonogram. Kieron Gillen and Jamie McKelvie's night in Bristol in the the lives of a group of young magic/ music worshippers. And it is cracking. I was directed to start with Phonogram 2; The Singles Club and now will catching up with all the others. I was utterly captured by the music 'interaction' with the stories. Then highly excited at the placing of action in part 7 at the bottom of Bristol's Park Street, including The Hatchet pub and the piss steps, places I know, which had a great personalising effect on the story. 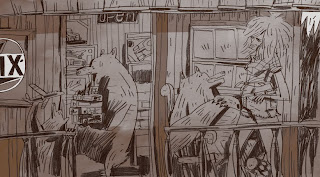 Clearly, this ain't a picture from the book. But Tina Turner IS on the books soundtrack. This is from a dream I had one night in my years in Bristol, where Tina Turner and bears run a trading post selling Airfix model kits. Music is magic.
Posted by WJC at 08:31

Always wondered what Tina had been up to since she retired.

I don't know how to start this but I spent the last week thinking about this blog. I'm serious. I think that I have never been so much amazed by a blog before. I don't remind of being so thrilled by a blog, so surprised, so happy. In the day I discovered your blog, I spent hours reading it and laughing. I was on my job, a game studio, and people starring at me without understand why I was laughing. Then I went home and turn the computer on just to continue to read your blog =) All posts brother, all of'em starting from your first post. And as I went through the posts I got sad cause i knew it was coming to the end..
Your artwork is amazing, you have an impressive sensibility. I really think that never got myself so impressed by a blog before. I do visit lots of art blogs but nothing like this. Really thanks for sharing your visions. it made my week so full of imagination and hope ina certain way, wich is aways good.

Rael, thank you very much, that comment made my day. But i've only just got home to have a look through your blog and man, that work ROCKS!

My blog has been a bit slow of late with all manner of stuff going on but i'm getting back on track.

Octavio, thanks. Make sure you let me know when it starts to suck.