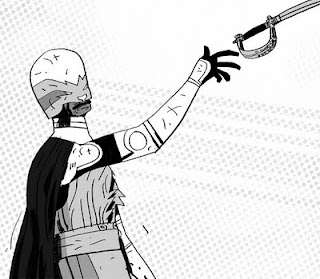 Lots of copies of Birdsong were bought by lots of nice people. I'm so happy to have been asked to join in with this book, it looks so good inside and out. Will and Lou were doing the Failboat thing there and Sarah McIntyre was selling them from her fantastically stocked table of goodies (and there's a dopey looking picture of me on the end of that link) Sadly, David O'Connell and Shakino where missing. I did a lot of talking about Birdsong #2 to everyone who was interested, including the marvelous Bob Etherington, who, accompanied by his brother Lorenzo (of the wild art) will be join us with a contribution to Birdsong 2. Out the other end of this year.

That guy up there is a main character in the next dose of Defenders of Albion.

More about Failboat's Nu-Earth Zine to come.
Posted by WJC at 14:34

I almost forgot! I bought a copy of Birdsong from the Bristol Expo. Your story was brilliant! The layout idea was really well done. Can't wait for the next!

Very much appreciated Marcel. And nice pages on your blog.

Thanks! Soon enough I'll have some stuff really worth looking at :)