This blog is really for drawings, notes, ideas and that sort of thing and not really writing. I don’t mind not making sense with the artwork as it goes up, once I’m done with it, once I’ve got something out of it and it might not necessarily be ‘finished’. So it’s likely that something like this will have a few problems, which I would apologize for but need not now as I have now halted my plans for a decent essay on this good stuff in favour of a link heavy list. 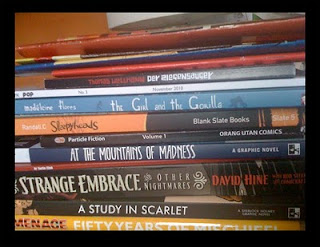 Since BICS I have got hold of an unusually high quality of comics. They are excellent in most ways and poor in very few. There is little point in me telling you why I like them, better that you try them yourselves and decide. Times are not ideal for trying new books, many of these I got through swaps. Some are in a foreign language and I cannot read them. Some maybe rarities though several can be found in the library. 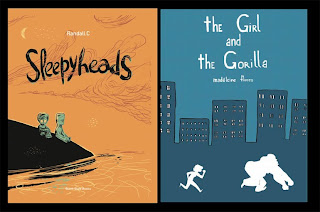 Slates 5 and 9 from Blank Slate Both inventive, unique and excellent (Flores book read now by most of my family now) 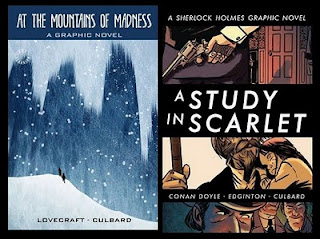 More sterling Sherlock Holmes and a truly epic and haunting book in At the Mountains of Madness. Actually, 'awesome' artwork and NOT in the easy internet sense, I was stopped in awe several times through the book (first page!!) 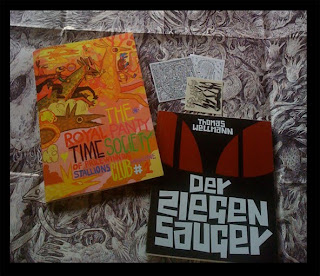 Both of these are in German and though I don't understand the language at all, I do understand comics. Aces. From here and here. 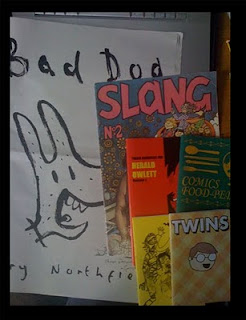 Bad Dog (Smashing) Slang (Don't know if Rob has any left but has the feeling of a comic that everyone should know and have read, brilliant work and I'm dead happy he gave me a copy) Herald Owlett (High energy) Comics Food-Pedia (Cliodhna Lyons and Tsuyoshi Ogawa) and Twins (Smashing) 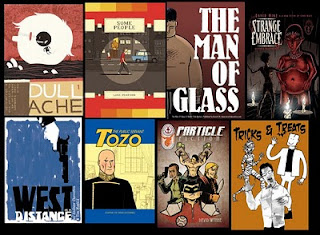 The combined effect of this new pile of comics in my house is one of energy and enthusiasm. They are very different in many ways, stronger and weaker in varying respects but a really exciting to have collected in little less than a month.

There are plenty of books still on my 'to get' list and no doubt accidental omissions too. The DFC library books aren't here today, they will have a post of their own and of course, Solipsistic Pop #3.

Thank you so much for this.
I went straight to Amazon.

What did you get? What d'you get?

the Sherlock Holmes and At the Mountains of Madness. For now...

Check out the enthoose, you're the cap tane of line-love. Key Pidup. Everyone love the love.

p.s. Love your lines the bestest.